Kushiro is home to a number of unique local foods. Check out these must-try local dishes.釧路発祥の料理続々!絶対食べたいご当地グルメ

The Kushiro and Lake Akan areas are a literal treasure trove of delicious foods. Many of these foods and the way they are eaten can be found across Japan today. Here, we will take a closer look at 12 local dishes that are a must-try on any visitor's itinerary. 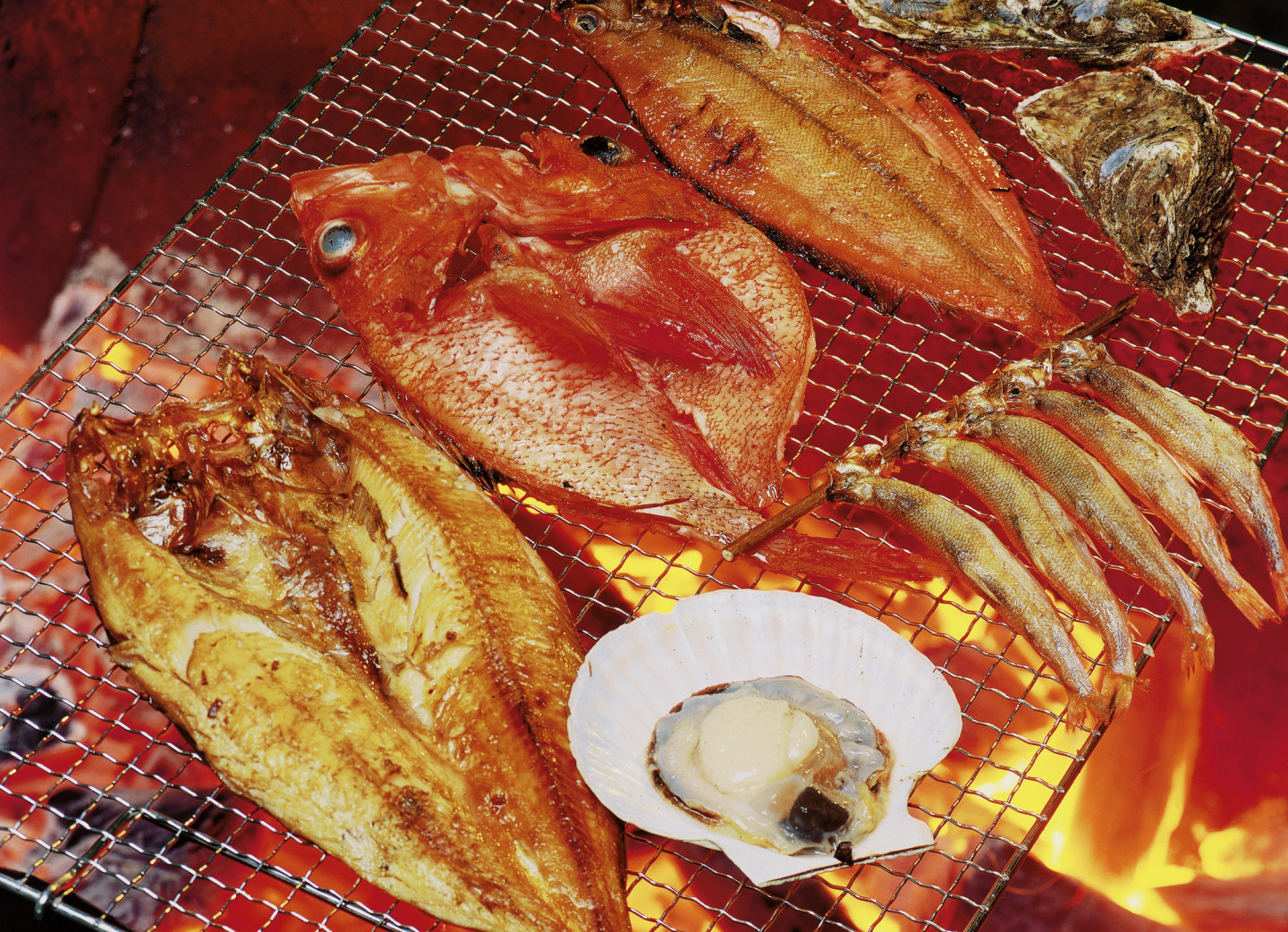 Robatayaki refers to a method of cooking fresh seafood over charcoal similar to barbequing. Kushiro is believed to be the origin of this form of cooking. In Kushiro, there are a number of establishments that offer robatayaki, including wharf side robata where patrons can cook their own ingredients and traditional robata restaurants where you can enjoy fresh and juicy seafood grilled to perfection, while sitting around a sunken hearth. The robatayaki style is perfect for enjoying the extravagant flavors of special local ingredients, such as delicious fish straight from the harbor which is known for one of the largest catches in Japan, oysters and other shellfish from local waters, as well as local crab and prawns.
More Details Kushiro Ramen is among the top four in Hokkaido, following Sapporo, Hakodate and Asahikawa. Kushiro Ramen is known for its super thin curly noodles served in a soy sauce based soup with katsuodashi broth. This is topped simply with chashu pork, boiled bamboo shoots and green onions, providing a delicious taste that will keep you coming back for more. Kushiro Ramen is served at a number of ramen shops each with their own unique soup, including Kushiro Ramen Kawamura, which is a still an undisputed leader of Kushiro Ramen. There are various theories about why Kushiro Ramen uses super thin, curly noodles. One believes it was to serve the ramen to fishermen returning to port as quickly as possible, while another says the thin and curly noodles were selected so that more soup could be soaked up, since the noodles were created to pair with a light soup.
More Details 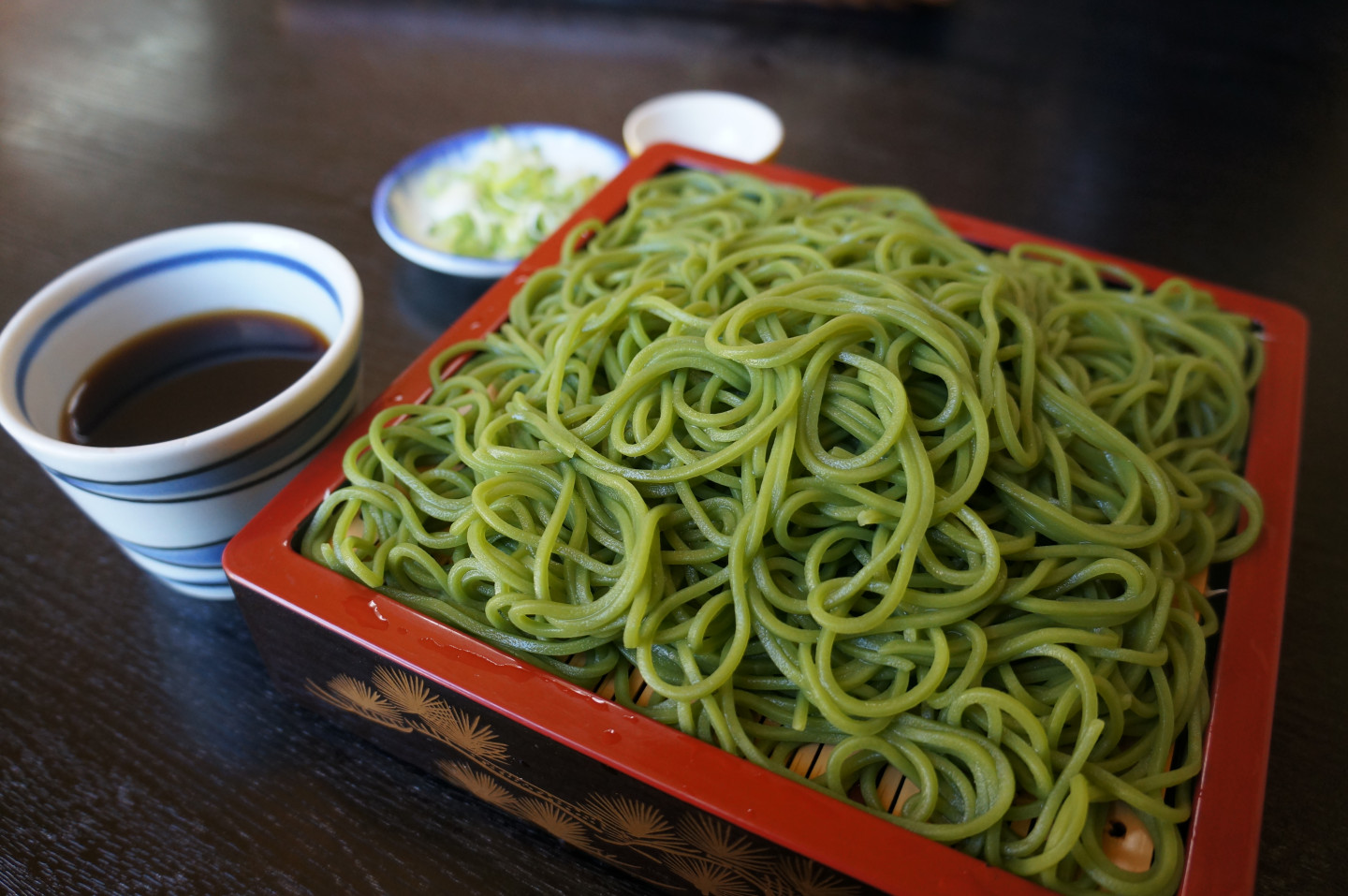 Kushiro is also known for its many noodle shops. Walk around the city and you will find a number of soba noodle shops, with nearly all of them serving green colored soba noodles. The green color comes from mixing chlorella with white Sarashina buckwheat. Chikuroen Azumaya Sohonten was the first to create this green soba and today you can still enjoy Kushiro soba made according to techniques that have been passed down since 1874. Check out the restaurant’s Soba Sushi, a unique menu item where soba noodles are wrapped in seaweed and dipped in soy sauce just like sushi. Another special menu item only found in Kushiro is Kashiwa Nuki, which is Kashiwa Soba without the soba. People in Kushiro love to order Mori Soba and Kashiwa Nuki together. When in Rome, do as the Romans do!
More Details 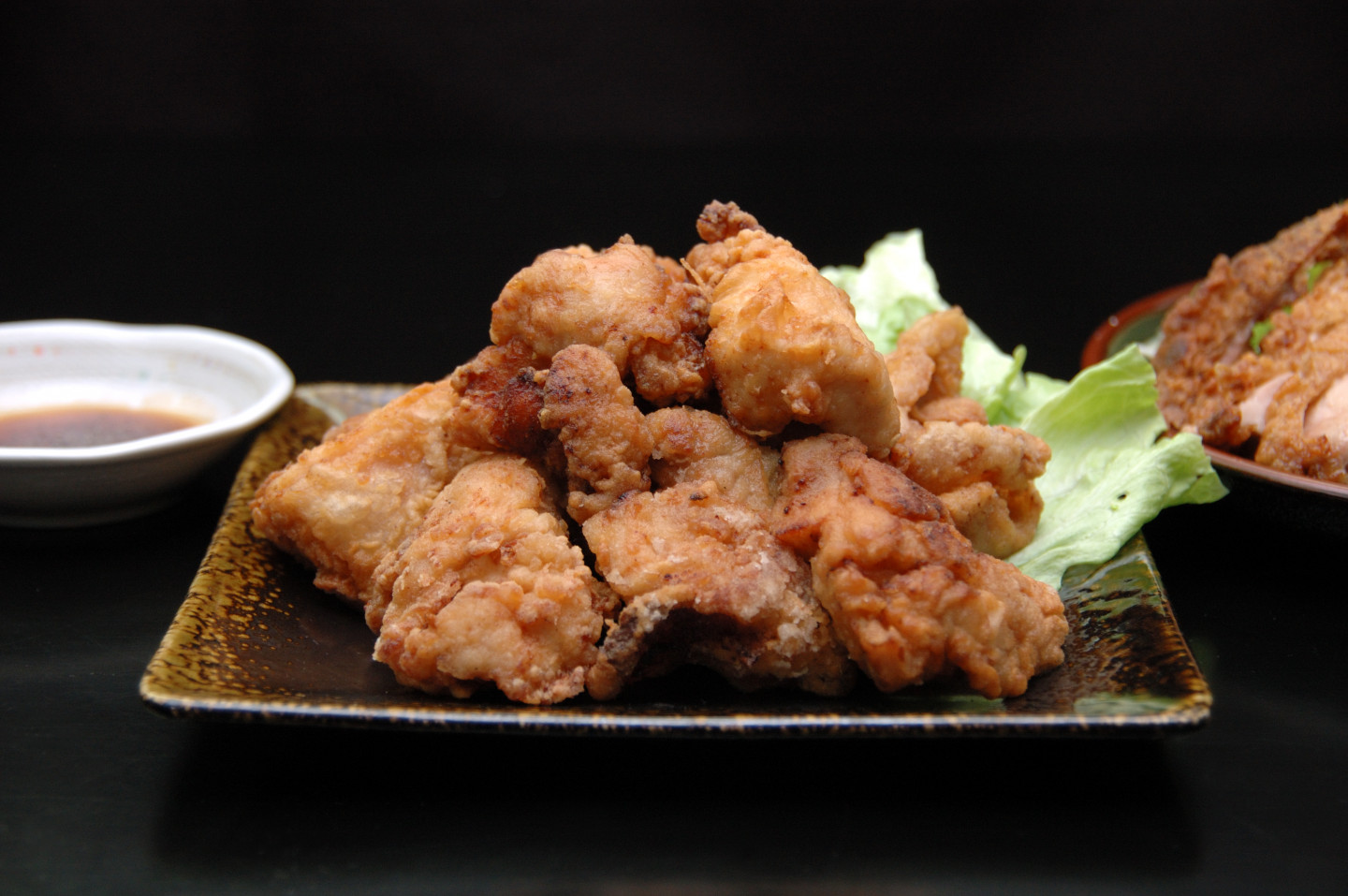 Zangi is another famous dish served in Hokkaido. At first glance, it looks just like chicken karaage (fried chicken), but the definition of zangi actually differs from region to region. Torimatsu is the name of a restaurant in Suehiro where zangi is said to have originated. The zangi available in Hokkaido is mostly boneless chicken meat, but the original zangi was chunks of bone-in chicken meat. Kushiro zangi is normally dipped in a special sauce and then eaten. The sauce served at Torimatsu is a secret blend similar to Worcestershire sauce that the restaurant has used since it was founded. The sauce that draws out the flavor of the crunchy zangi pairs perfectly with sake. Although the word zangi does not conjour up images of food, the word was created from the Chinese word jaji, or zagi, with the pronunciation “n” of good luck or happiness (koun) added to it. As the name indicates, you’ll be very happy if you eat this delicious dish.
More Details 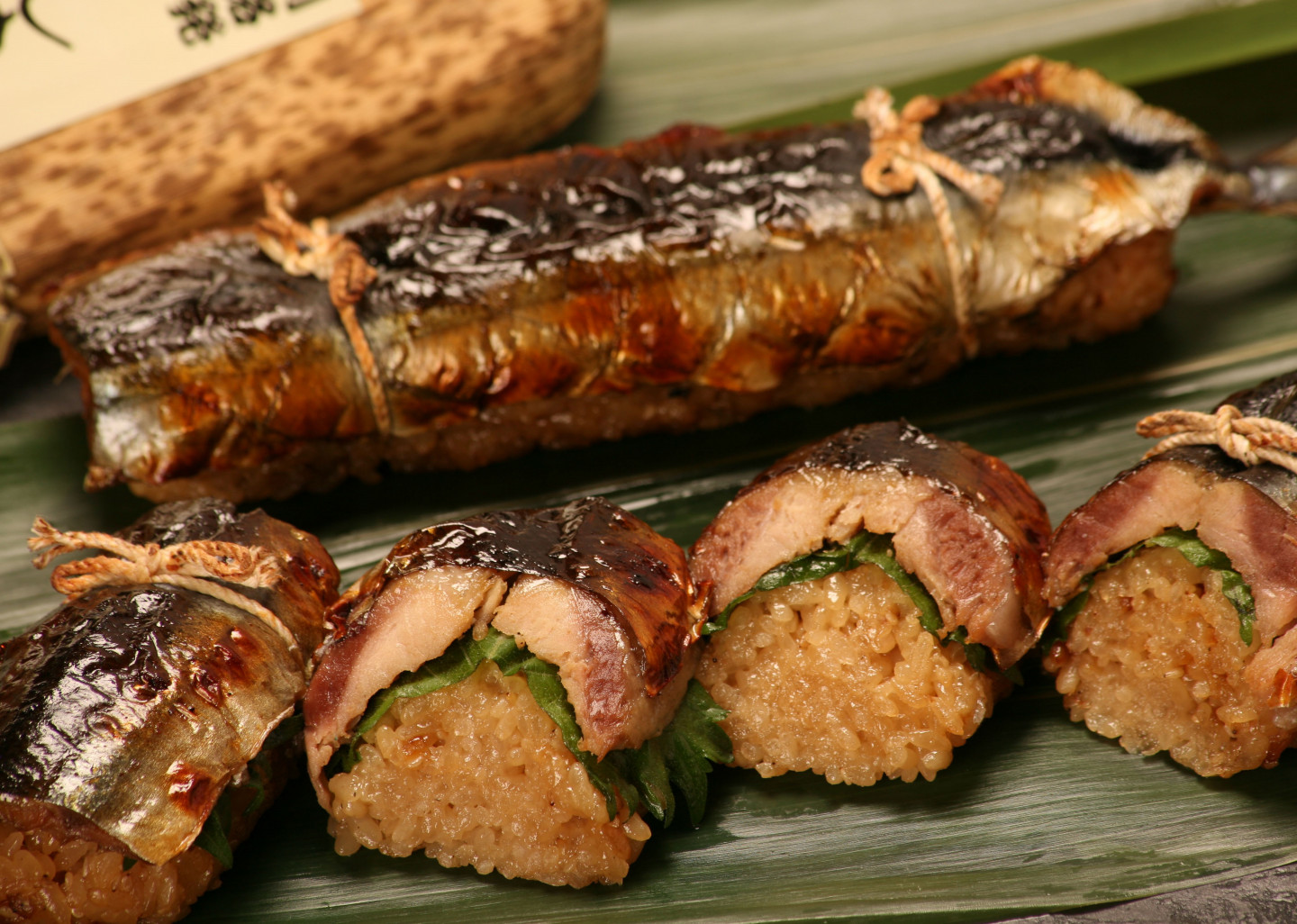 Kushiro’s pacific saury is one of the city’s most famous catches in all of Japan. Pacific saury landed in season are nicely fatty with tightly packed meat. Sanmanma is a food that was created in order to get more people to enjoy the delicious taste of pacific saury. This dish is made using an entire pacific saury with all of its bones removed. It is then marinated in a soy sauce based sauce, wrapped in rice and then barbequed over charcoal. The beefsteak plant garnish isn’t overpowering and provides a refreshing after taste. Each Sanmanma is cooked up individually by hand by master chefs, which draws out the delicious taste of the pacific saury even more. Those who want to try this dish right away can head to a restaurant or you can also buy a frozen one as a souvenir to enjoy in your own home. Sanmanma is very popular among foreign visitors who don’t like fish with the bones in.
More Details 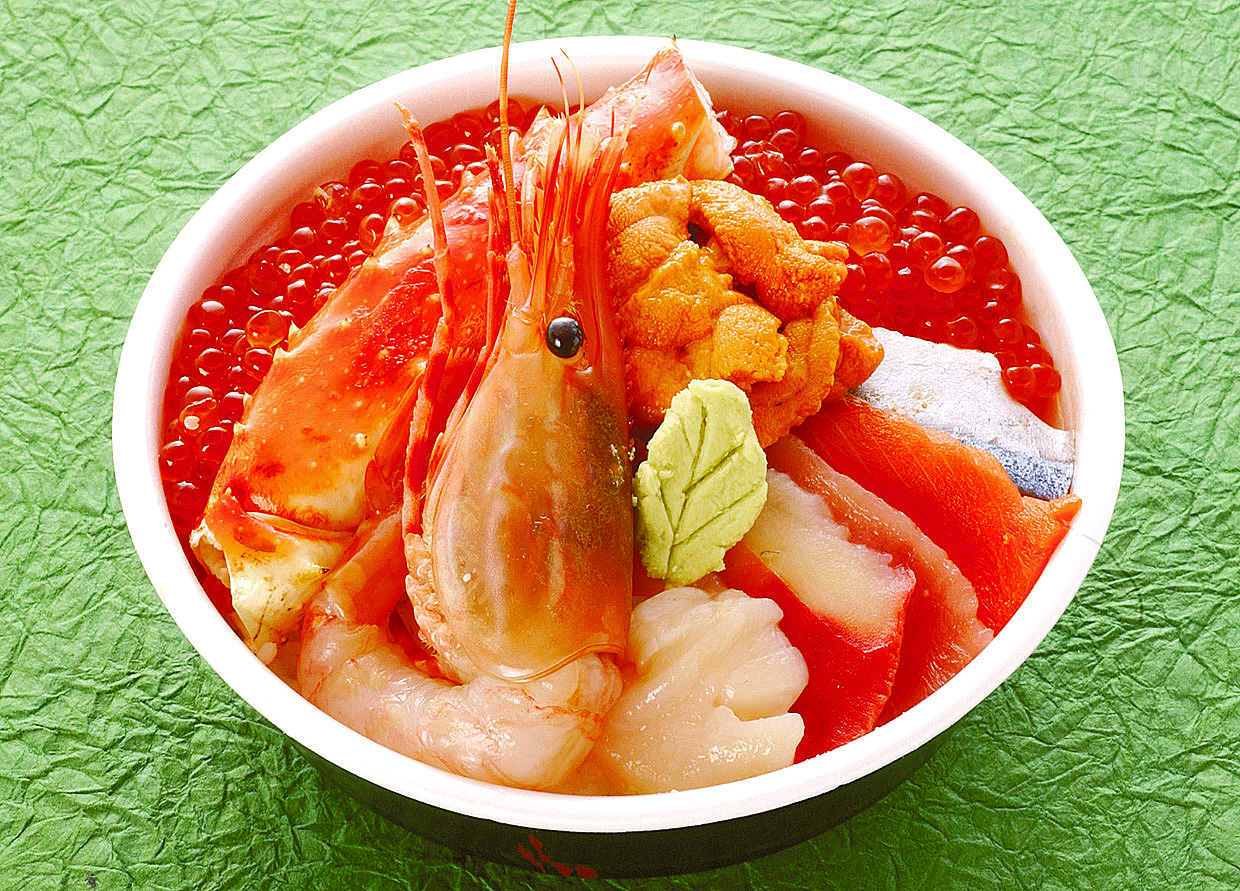 Katte-don is a Kushiro original kaizen-don (raw seafood served atop a bed of rice) where you select your favorite toppings on the spot. It was first served at the Washo Market. Known as Kushiro’s kitchen, Kushiro’s Washo Market is considered to be one of Hokkaido’s top three markets. Here you will find a huge assortment of freshly caught seafood from Kushiro Port. Traditionally, you make a Katte-don by carrying around a bowl of rice to each store in one hand and select your favorite ingredients with the other. Ingredients vary depending on the store. Katte-don began as a dish geared toward motorcycle riders touring the area who didn’t have much money, so they were sold only rice at a prepared foods shop and then sold marine products individually. This practice gradually became known through word of mouth and now today anyone can enjoy Katte-don, which helps visitors to enjoy the many marine products that Kushiro has to offer.
More Details 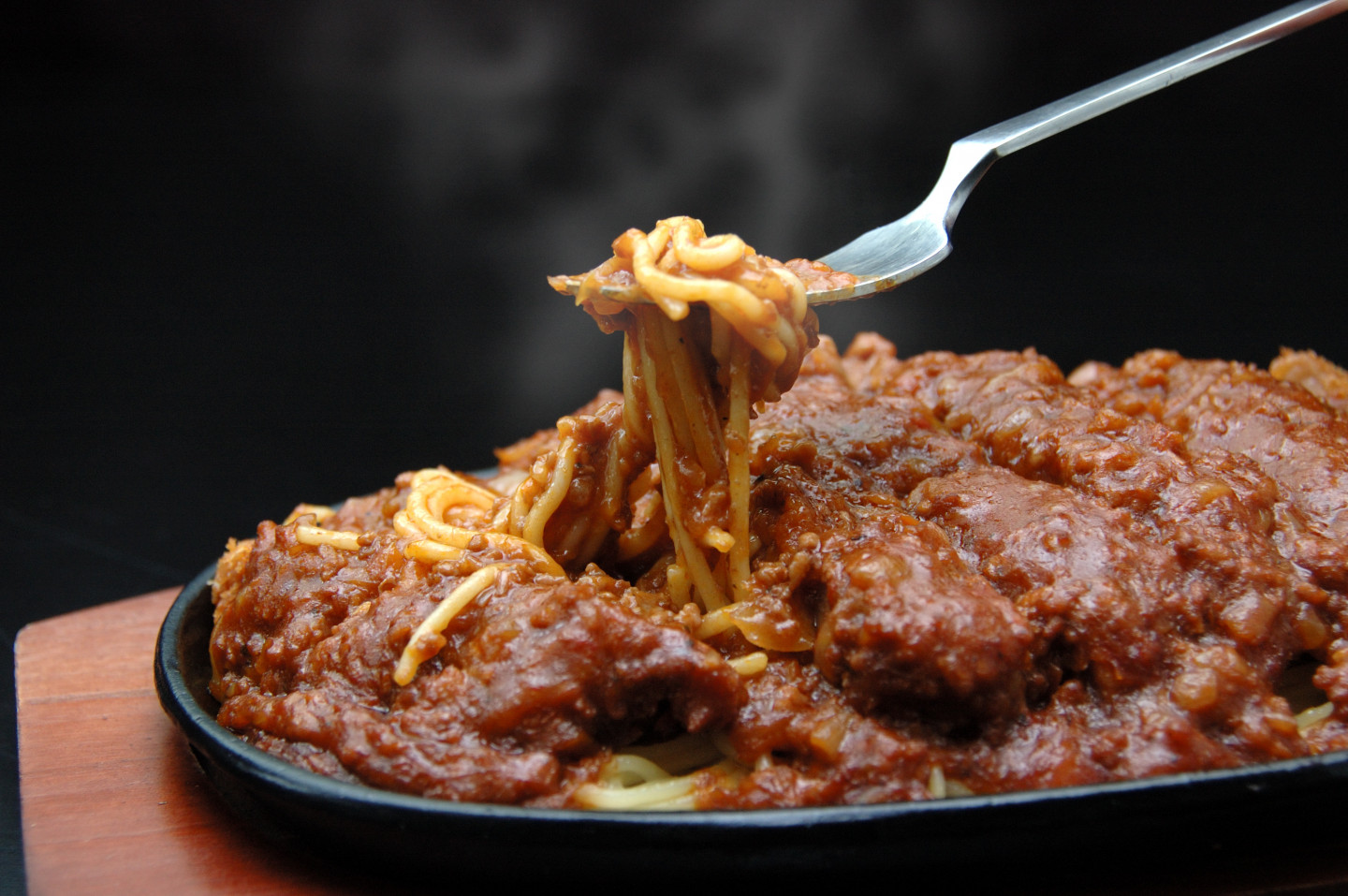 Supa Katsu, which originated at a Western restaurant called Izumiya, features savory meat sauce and spaghetti topped with a thick and juicy cut of tonkatsu, all on a piping hot iron plate. It’s known for its hearty helping that is about to fall off the plate. Izumiya is a long-standing restaurant serving Western foods that first opened in 1960. At the time, the restaurant got its start by deep frying pork, a luxury item at the time, so that customers could feel a sense of luxury. This deep fried pork was served on a hot iron plate because the owner wanted to ensure that customers could enjoy their food hot until the last bite, even in such a cold place as Kushiro. The menu item name Spaghetti Meat Sauce Topped with Katsu has been shortened to just Supa Katsu, which is now a soul food of Kushiro enjoyed by people of all ages, from children to seniors.
More Details Signal crayfish, a specified alien species brought from outside of Japan, has proliferated in Lake Akan, wreaking havoc on the lake’s environment, including the habitat of the marimo. For this reason extermination efforts have been ongoing. Yet, in France crayfish are considered a luxury food on par with lobsters. Because the signal crayfish offers a premium taste similar to crab and its shell produces a thick and savory soup, people gave it the brand name Lake Lobster, as exterminating these signal crayfish would be a waste, thus transforming a nuisance into a local specialty item. In addition to the Lake Lobster Soup sold by the Lake Akan Fishing Cooperative, local restaurants now carry new menu items made from Lake Lobster, including the delicious Saribonara served by Onsen Kobo Akan at Lake Akan,
More Details 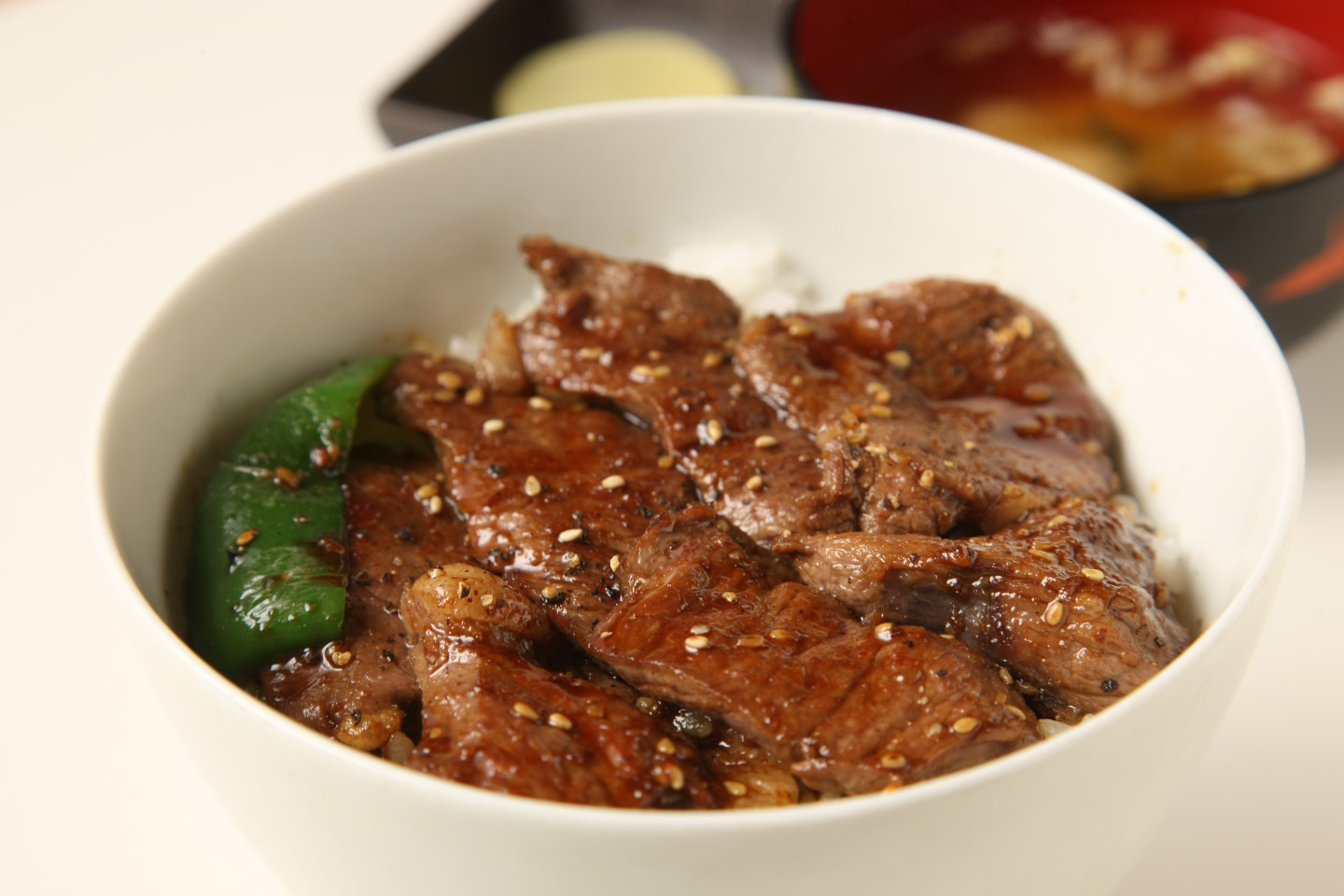 In recent years, deer meat has received a great deal of attention as an ingredient used in wild game cuisine. Akan Onsen’s own Ainu Kotan village, the largest such village in all of Hokkaido, has served deer meat as local cuisine from before its popularity. Deer meat offers lower fat content and greater nutritional value than beef or other types of meat. It is also rich in iron. This makes healthy deer meat an ideal choice for women or people who are more health inclined. The gamey aftertaste is removed using traditional processing techniques, making the meat delicious and easy to enjoy.
More Details 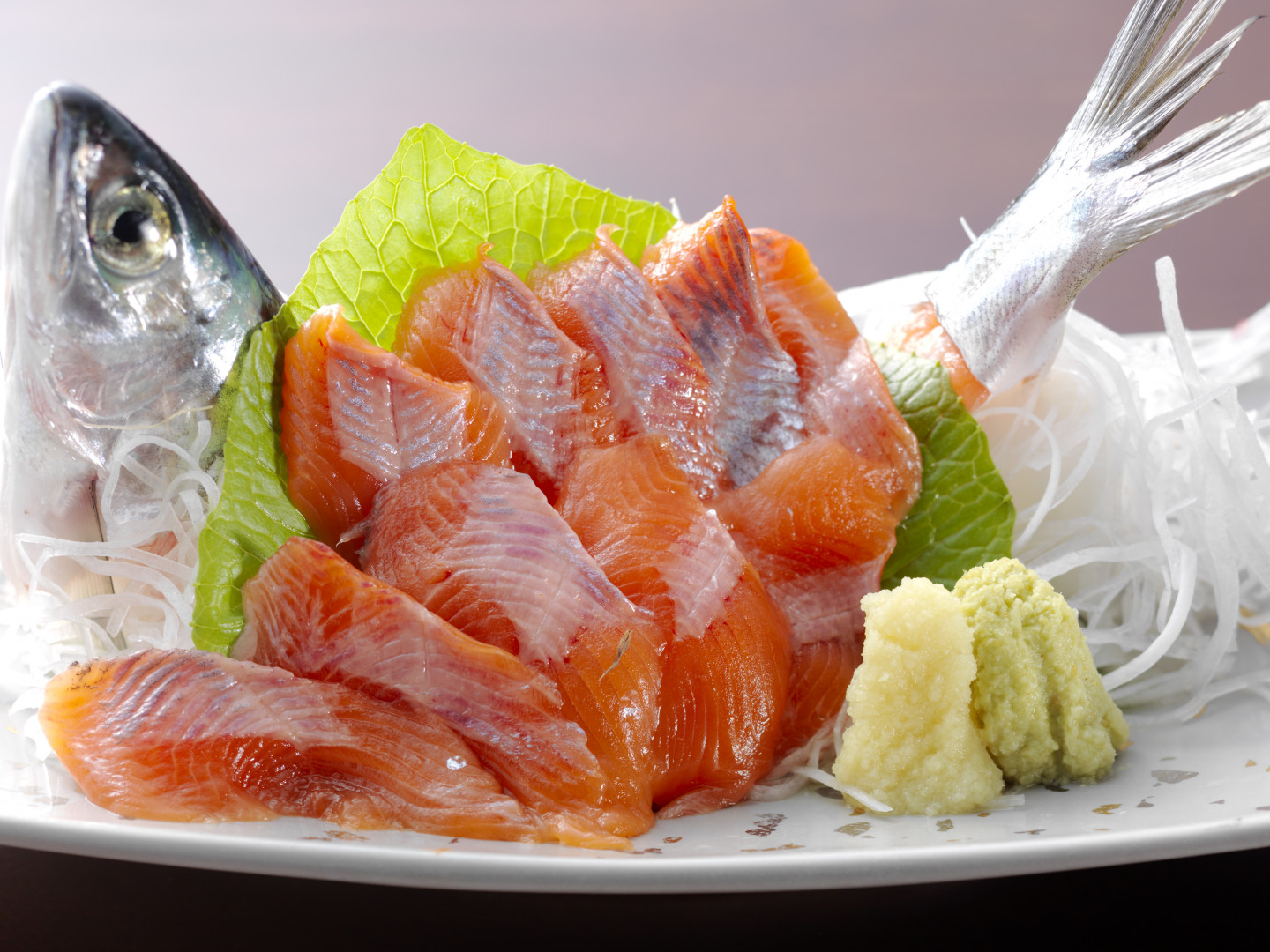 Lake Akan offers the rare chance to eat landlocked kokanee salmon called himemasu. This species of salmon is known for its particularly great taste. It is truly rare species in Japan as it can only be found in Lake Akan and Chimikeppu Lake. It is known to have a strong taste and a high water content, making it suitable both for barbequing or eating it raw as sashimi. The origin of the kokanee salmon in Hokkaido can be traced back to when sockeye salmon that swam back to Lake Akan remained their and evolved so that they spent their entire life in the lake. Currently, this kokanee salmon is designated as an endangered species and only a predetermined number can be caught each year. All of the himemasu served at Lake Akan are natural. Depending on the restaurant, some menu items are only serviced in season from May to July, because the fish loses its freshness so fast. You can also purchase himemasu sushi as a souvenir from the Lake Akan Fishing Cooperative.
More Details 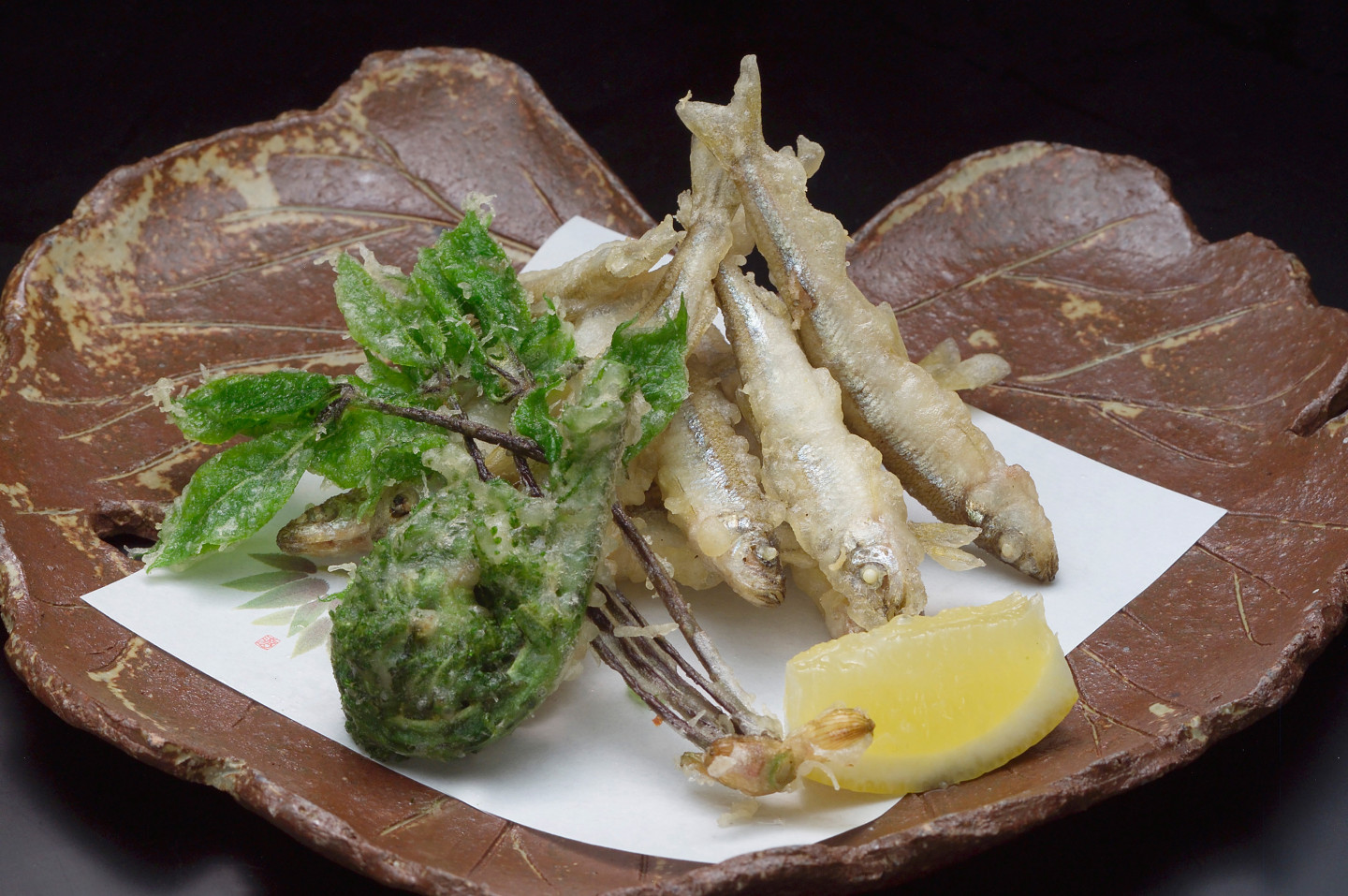 Sushi is another must-try item because Kushiro is famous for its marine products. The freshly caught marine products made into sushi and eaten even at conveyor belt sushi restaurants in the city are considered to be of the finest quality. Must-try types of sushi include Kushiro’s famous tokishirazu salmon, mackerel, pacific saury, and shishamo smelt. Eating raw fish that lose their freshness quickly, such as pacific saury and shishamo smelt, is a treat only found locally.
More Details