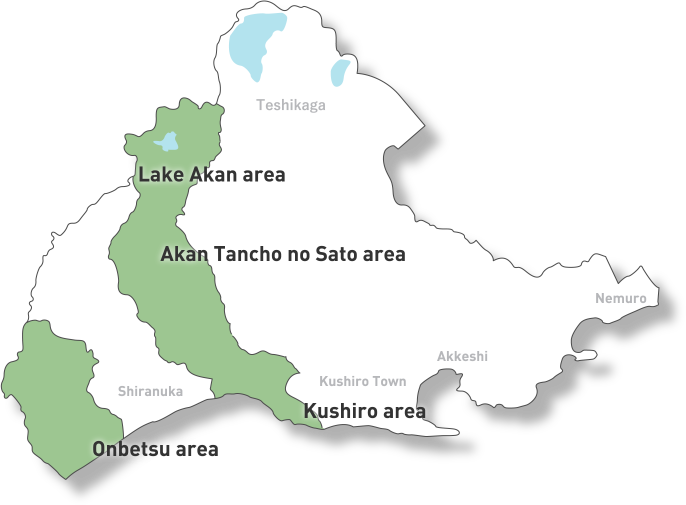 home to two major national parks, namely, Kushiro Shitsugen National Park and Akan-Mashu National Park. The region is blessed with vibrant nature and an abundance of wildlife, where visitors can witness rare animal and plant species in their natural habitat, including tancho crane and marimo of Lake Akan, which are both designated as a special natural monument of Japan.
The Lake Akan area also offers plentiful opportunities to interact with Hokkaido's unique culture up close, such as Japan's largest Ainu kotan (village).
It is a very special place in all of Japan where you can immerse yourself in the harmonious co-existence of urban life, great nature, and Ainu culture.
The region is readily accessible from Tokyo via Haneda Airport to Tancho Kushiro Airport in just 90 minutes, or by train from Sapporo in four hours. Shiretoko National Park, a World Natural Heritage site, is about three hours away by car. As Hokkaido’s fourth largest city, Kushiro serves as a hub for many tourists from around the globe.

Bounty of the sea, as Kushiro once had the largest catch of any city in Japan

"What is Kushiro famous for?" Most would reply, "Delicious seafood!" The seas off Kushiro are considered to be the most abundant in Japan, with Kushiro boasting Japan’s largest annual catch. As a reminder of the port town's glorious past, Washo Market, considered one of Hokkaido's "big three" markets still serves as a main hub to locals and tourists alike. Besides seafood caught from the seas of Kushiro, Washo Market also offers a wide selection of agricultural and other food products in addition to marine products. It is the place to check out the fresh catch most representative of Hokkaido, including crab, tokishirazu salmon, Pacific saury, and shishamo smelt, when they are in season.
The city of Kushiro is a town offering wonderful culinary experiences with numerous restaurants serving signature local dishes in soba as well as Western-style restaurants.

Did you know that sunset in Kushiro is recognized as one of the world's three best? Once upon a time, sailors who traveled the world's oceans considered Kushiro's sunset to be among the world's top three. The changing seasons and unique expressions of each day make every sunset unforgettable.
Kushiro area is home to two national parks, Kushiro Shitsugen National Park and Akan National Park. Kushiro Shitsugen is Japan's largest wetland that is the same size as Tokyo's 23 wards, making it a cradle of nature that nurtures rare animal and plant species in the area. The magnificence of nature can be viewed up close from observatory decks, train car windows, and canoes. Located within Akan National Park are the three crater lakes of Lake Akan, Lake Mashu, and Lake Kusharo, while the area is also one of the most well known hot spring towns in Japan.

Kushiro is the home of the tancho crane and marimo

One simply cannot visit Kushiro without seeing the tancho cranes, designated as a special natural monument of Japan. Once thought to be extinct, tancho cranes are now a symbol of Japan that managed to survive thanks to the richly preserved nature of eastern Hokkaido. Conservation activities have contributed to their rising population, enabling visitors to witness their beautiful existence on the winter snowy fields.
Marimo of Lake Akan, a designated as a special natural monument of Lake Akan, is another wondrous work of art in nature. The largest sized marimo measures 30 centimeters in diameter; their perfectly formed spherical shape and velvety texture signifies one of the Earth's miraculous works.
The Kushiro-Akan area is home to rare species of plants and animals including Steller's sea eagle and white-tailed eagle that fly in the air, and the Sakhalin taimen in the river.

・The best place to view the tancho cranes, steward of the wetlands：http://en.kushiro-lakeakan.com/overview/3760/